As reported in my previous post, the Draconids meteor shower showed an exceptional peak on the evening of 8 October 2012 near 17h UT. The peak was very pronounced in data from the Canadian Meteor Orbit Radar (CMOR), which reported rates up to 2300 meteors/hour. In fact, I am told that this radar system recorded more meteor orbits that day than on any other day in its 13-year history.

While the peak was clearly exceptional in terms of radio observations, it remains unclear how many meteors could be seen with the naked eye or video cameras. The time of the peak mainly favoured sparsely populated areas of our planet, and visual observations have so far only been reported by amateur-astronomers Alexandr Maidik in Ukraine (who recorded 55 Draconids between 16h00-18h00 UT) and Jakub Koukal in the Czech Republic (who recorded 60 Draconids between 17h00-19h10 UT).

Using their data, I posted this graph of the Zenithal Hourly Rate (ZHR) on the website of the International Meteor Organization (IMO):

Visual activity curve of the 2012 Draconids.

While Alexandr and Jakub are both very experienced and reliable observers, two visual reports are never enough to construct a reliable activity profile. This is because different observing conditions introduce different systematic uncertainties in the ZHR estimates, which can only be corrected by averaging a large number of independent observations.

The latter estimate of ZHR ~100 meteors/hour seems broadly consistent with data from the IMO video network, which caught the end of the peak and reported ZHRs in the range of 30 to 60 meteors per hour in the interval 17h00-17h20. This is mainly based on two stations in Hungary, operated by amateur-astronomers Antal Igaz and Zsolt Perko: 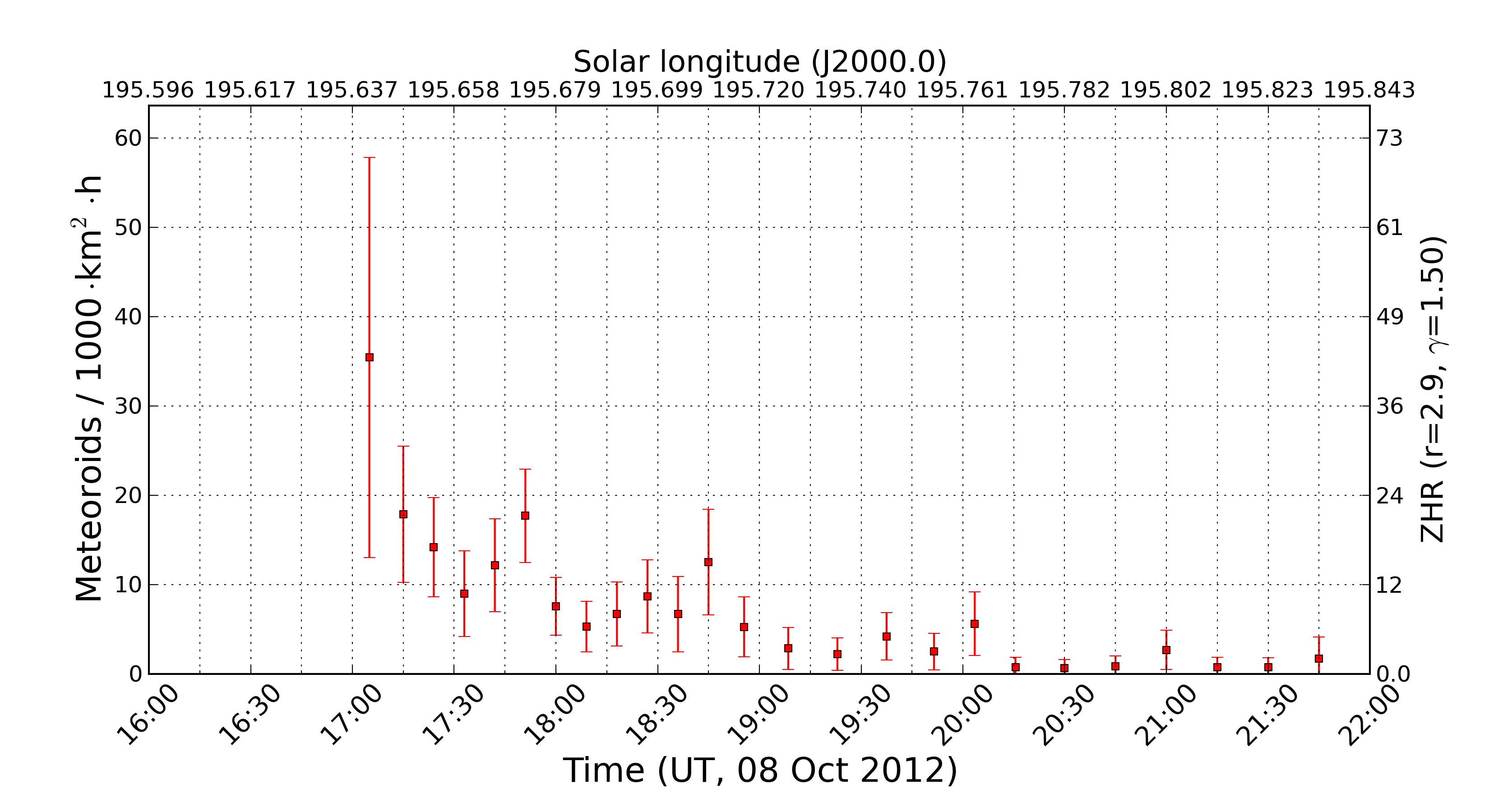 On the basis of this visual and video data, it seems tempting to conclude that the outburst was dominated by small meteoroid particles and hence produced only a moderate outburst in the optical (ZHR < 200 meteors per hour?), but more data is required to make such claim.

If anyone is aware of reports from Russia or China about this event, please shout. This area of science crucially depends on data provided by citizens.