For the second year in a row, reports are emerging about a major peak in the activity of the Draconids meteor shower. Radar observing stations in Canada and in Germany reported up to 1000-2000 meteors/hour between 16h and 18h UT on 8 October 2012. Evidence for an outburst is also apparent in data from some forward-scatter radio stations operated by amateur astronomers.

Radio observing systems are only sensitive to the smallest meteoroids, which produce very faint shooting stars. It is not yet clear how many meteors were bright enough to be seen with the naked eye or video cameras. However, independent video observers in the Czech Republic and Germany told me they recorded more Draconids than usual in the early evening hours (~10 to 40), which does indicate a significant enhancement (albeit no exceptional storm). Careful analysis will follow.

Note that the time of the peak did not favour most parts of Europe, which were still experiencing evening twilight. Observers across Asia were best placed to observe the event. Green and yellow areas in the map below indicate parts of the world where the sky was dark, and the radiant above the horizon, at 17h00 UT tonight: 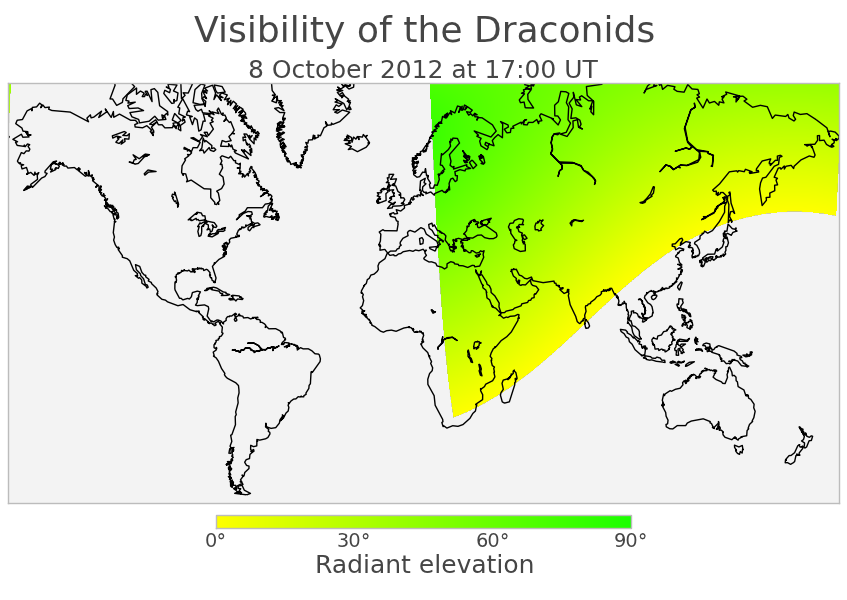 Green and yellow areas in the map indicate parts of the world where the sky was dark, and the radiant above the horizon.

This outburst may have been caused by the narrow trail of dust and debris left behind by the parent comet in 1959. Our planet had been predicted to encounter this specific dust trail in 2012 by meteor modeler Mikhail Maslov, but the level of activity appears to have been somewhat higher than expected. This is not a first for the Draconids: similar surprises occured in 1985, 1998, 1999, 2005, and MAJOR storms were seen in 1933 and 1946.