Two weeks ago, I posted an animation on YouTube showing where Comet PanSTARRS would be visible. The video attracted more than 15 000 hits, and although this is not a proper statistical analysis, I would like to draw attention to an interesting result in the demographic analytics provided by YouTube: 75% of the viewers were male. 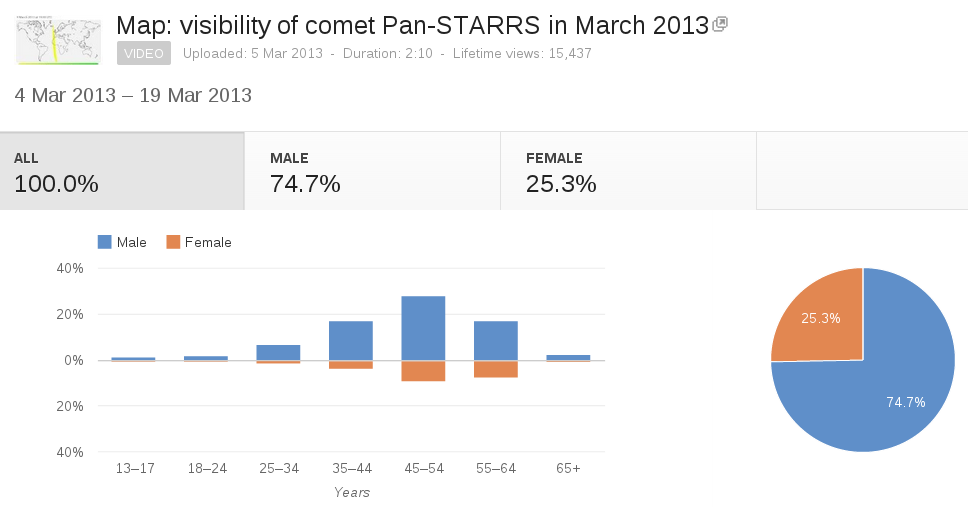 YouTube demographic statistics for the animation of comet PanSTARRS's visibility.

Although the numbers are only based on the ~20% of viewers which were logged into a YouTube account while watching, statistics like these may reveal broad trends about the public interest in astronomy. If we were to assume that all people interested in astronomy are equally likely to have watched the animation, and if in addition we assume that these people are all equally likely to have a YouTube account regardless of their age/gender, then one might conclude that (middle-aged) men are twice more likely to seek for comet information than women. Interestingly, this is broadly consistent with the (unfortunate) trend of large male majorities in astronomy clubs and university departments.

There is no doubt that the above assumptions are wrong to some degree, and that the YouTube statistics are hence biased. It is not clear how severe the bias is however. I tried Googling for demographic statistics of YouTube users in general, but could not find consistent information. (Does anyone know a reliable source? Are 75% of YouTube users male anyway?!)

If the biases can be accounted for using a proper statistical analysis, then the analytics offered by science-themed YouTube videos would provide a way to measure the public interest as a function of age, gender and topic.